The Evolution Of Bury Tomorrow 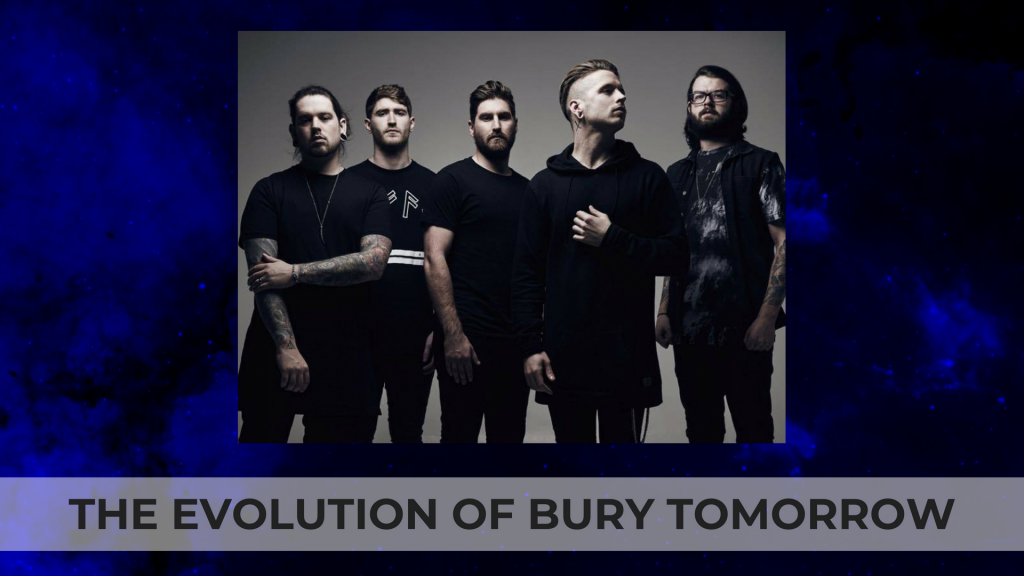 Making the break as a band isn´t easy at all. It requires talent, concerts, tours, EP´s, albums, and often the attention of a label. Before that happens, you have to do all of this stuff alone. Most of the time for free.

Today´s example of how this way can look is Bury Tomorrow, which climbed it´s way to the top and is making some BIG NOISE with the release of their newest album „Black Flame“ right now!

Talking about cohesion: Almost all of the original members are still in the band, as there was only one member change in the history of Bury Tomorrow.

When asked about their most prominent influences in an interview, their answer was:

– „The End Of Heartache“ by Killswitch Engage

– „Waking The Fallen“ by Avenged Sevenfold and

– „Reroute To Remain“ by In Flames

Remember the part where i said „You have to do all this stuff alone“?

Bury Tomorrow did exactly that. They started with some local concerts and by self-releasing their EP „The Sleep Of The Innocents“ in 2007.

They used the next two years to show people that they can make some hardbanging music and open pits up in the crows.

This caught the attention of „Basick Records“, which signed them and released Bury Tomorrows first album „Portraits“ back in 2009.

The first full length album. And a really good one! Up to this day, fans still remember the music video for „Her bones in the sand“ , which they made for the promotion of their first „Big One“.

What came next was an UK tour and the release of their second EP „On Waxed Wings“ in 2010, which was also released by „Basick Records“.

Bury Tomorrow continued to make some kick-ass songs and climb the metalcore ladder, suddenly getting the attention of the german label „Nuclear Blast Records“, a big independent metal label which got bands like Eluveitie, Wintersun, Slayer, Sabaton, Children Of Bodom, Sepultura, but also some famous core bands like Carnifex, Rings Of Saturn and Suicide Silence signed.

The first Nuclear-Blast Album for the british band came with „The Union Of Crowns“, their second LP.

So they came in big, making up to 5(!) music videos off „The Union Of Crowns“:

One of them, „Lionheart“, turned out to be one the bands most popular songs. Even today, 6 years and 3 albums in between, the song is one of the bands most played on spotify!

What followed was Bury Tomorrows first big UK Tour, the „Union Of Crowns UK Tour“, in 2012.

And the first (and only) member change up to now: Lead guitaris Mehdi Vismara left the band and was replaced by Kristan Dawson.

Being signed by one the big players in the label game with Nuclear Blast was a great achievement. But the international breakthrough wasn´t yet achieved. Outside of the United Kingdom, people knew Bury Tomorrow only from their YouTube videos.

This fact should change with the release of their 3rd album „Runes“. Especially with the making of a music video for „Man On Fire“, which made this song the possibly most known up to this point.

They complimented their rising fame by supporting Caliban, one of germanys biggest metal bands with fans all around the world, on their „Ghost Empire European Tour“ in 2015.

This helped Bury Tomorrow to get the international attention they definetely deserved.

Being known in more and more countries, the fans wanted to hear some new stuff. And the british friends delivered!

And again, they played clever and adapted to a new trend of bands releasing exactly 3 song videos before the official album release.

In addition to get their new sounds heard all around the world, they supported on one the biggest Metal Bands in the game, Parkway Drive, on their „IRE Tour“ around Australia, North America and Europe.

Their own headlining tour followed 2017 with the Europe/UK tour for „Earthbound“, which put them up in line with the elite bands of todays Metalcore.

They made sure to rise their popularity in Metal-Germany by playing at the famous Impericon Festival in 2018, also for Pre-Promotion of their next album, which they announced to be released on Friday, the 13th of July 2018

And here we are! As of today, the 17th of July 2018, Bury Tomorrows newest album is 4 days old and already dropped like a bomb in the heart of many listeners. Spotify´s Top 10 BT Songs already contain 6 songs of „Black Flame“ and the „Black Flame Tour“ which is announced for November this year promises to be a great success!

Songs like „Black Flame“, „No Less Violent“ and Cradle Of Filth-Style „Knife Of Gold“ will surely smash live, just like they are doing right now on our headphones!

Becoming famous as a modern band is surely no easy task. It takes hard work, dedication and some luck to make it, as you can see from the evolution of Bury Tomorrow, which started at the bottom with self releases and concerts without getting paid, and climbed their way all up to todays Metalcore Elite.

To end this, i want to add in one last side fact: Back in 2008, two years after the founding, Bury Tomorrow seriously considered to break up, leaving behind everything.

Imagine they didn´t stood patient, determined and focused over the 10 years after this decision.

The band would be known to some folks in UK, but people like me, who live in Germany, wouldn´t have heard even one of their songs…

What are your thoughts on Bury Tomorrow? And what do you think of „The Road To Become A Big Band“ in general?

Let me know in the comments below, and if you know any Bury Tomorrow Fan, make sure to show him this article, as it was a pain in the ass to gather those informations, but is also an awesome timeline for those british boys, isn´t it?